Will Eating While Driving Affect my Accident Claim? 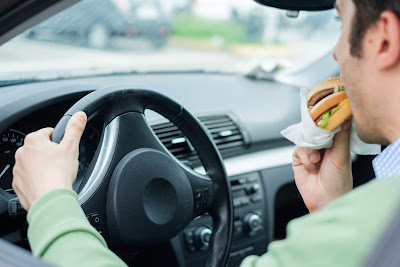 A common scenario many people experience is rushing to commute to their jobs in an attempt to avoid being late but there, unfortunately, is no time to eat. What many might do is grab some food and then try to kill two birds with one stone by eating and drinking while driving. On paper, this may seem like a great way to make your commute more efficient but unfortunately, this multitasking comes at a price. What many of these people do not realize is that eating while behind the wheel is a good way to put yourself at immense risk to become involved in a car accident and can have an impact on an attempt to seek compensation for injuries in the aftermath.

Car Accident Claims if You Were Eating and Driving

Many car accidents are caused by people that eat or drink while driving since this behavior is considered part of distracted driving. On the other hand, there are many accidents where someone that was eating while behind the wheel was not the one that caused the accident. However, this behavior can have a negative impact on any later attempts to seek compensation for car accident injuries through a car accident injury claim.
This behavior is considered to be negligent even if you were not necessarily the one that caused the accident. For example, you could have been taking a bite out of a sandwich while driving somewhere when a drunk driver ends up t-boning your car at an intersection. You may feel that you eating the sandwich did not have any influence on the accident occurring but the defense in a car accident claim would make the argument that your behavior was negligent and therefore helped to contribute to the accident to a degree.

If it is found that you were eating or drinking while driving at the time of a car accident then regardless of whether you directly caused the accident or not, your behavior can be considered negligent and can affect your claim. Florida has what is called comparative negligence which means that when someone tries to seek compensation for an accident that they contributed some degree of negligence to, then they have that level of negligence calculated into a percentage that is deducted from a possible settlement.
For example, let's say that someone is involved in a car accident where another driver makes an illegal left turn and hits your oncoming vehicle. Their illegal left turn is pretty clearly the fault of the accident but you were texting and driving when you were hit. If you suffered severe accident injuries and tried to seek compensation through an injury claim, your texting and driving would be considered negligent behavior that affected your ability to react to the illegal left turn. Therefore, it might be calculated that you contributed 20% of the negligence towards the accident occurring while the majority goes to the driver that made an illegal left turn. You can still seek compensation despite contributing negligence but the total amount you receive in a settlement would have 20% deducted on account of the negligence that you contributed.

Does Eating and Driving Really Create a Car Accident Risk?

Why is Eating or Drinking While Driving so Dangerous?

Eating or drinking while driving is a textbook example of this regardless of how much you may think you are able to multitask. Drivers are supposed to have both hands on the wheel and their focus on their surroundings while driving. When you eat while driving you are usually going to need a hand to hold the food. On top of this, you need to use your mental faculties to guide the food to your mouth which takes some motor function focus away from driving. You may also have to open lids, unwrap packages, use a fork, and other more complicated movements that can take attention away from driving. Then also comes the risk of spilling food and drink while driving which can be a dangerous distraction especially if it is extremely hot or cold.

Suffering an injury at the hands of a distracted driver can rack up medical expenses, lost wages, and many other costs that deserve compensation. Consider Sibley Dolman as your legal representation in your pursuit of compensation with a car accident claim. Our lawyers have the experience needed to ensure that your case receives the best chance of success so that you can focus on recovery and getting your life back to normal.
If you were involved in a car accident, our lawyers at Sibley Dolman will investigate your case, and may help you obtain the compensation you need for damage done to your person and property. To schedule a free consultation and case evaluation with a Sibley Dolman attorney, please contact us at (727) 222-6922, contact us online, or visit us at one of our three office locations in Florida. We look forward to hearing from you and will vigorously advocate on your behalf for the compensation you deserve.
Sibley Dolman
1663 1st Ave S.
St. Petersburg, FL 33712
(727) 222-6922


https://www.dolmanlaw.com/st-petersburg-car-accident-attorneys/
Posted by Matthew A at 3:31 PM 6 comments: