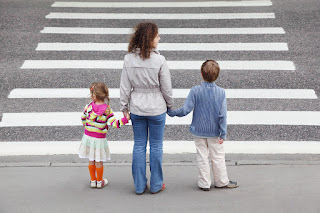 Millions of Americans walk along or across roads every day. Whether it be commuting to work, running errands, or just going for a leisurely stroll, pedestrians are an important part of the roadways in most big cities. In Florida, where the year-round warm weather leads to more people being outside, pedestrians are an even more common sight.
Unfortunately, accidents involving pedestrians often result in greater injuries and even death than those involving cars. Without seat belts, air bags and car frames to protect them, pedestrians are at a much greater risk of severe injury or death. In 2013, 4,735 pedestrians were killed in traffic accidents in the United States alone.1 Accidents involving pedestrians are most likely to happen in urban areas at night and most often take place outside of intersections.
Who Is at Risk?
Children: Children are likely to be involved in pedestrian accidents as they are likely to be in the road unexpectedly and their small size makes them more difficult for drivers to see. In 2013, of all of the children under the age of 14 who died in traffic accidents, one in five was a pedestrian.
Elderly: The elderly are also more likely to be involved in pedestrian accidents. Pedestrians aged 65 and older accounted for 19% of all pedestrians deaths in 2013.
Alcohol-Impaired: Of all of the pedestrian accidents reported that resulted in a death in 2013, 49% involved alcohol consumption, with the pedestrian being over the legal limit in 34% of the fatal accidents.
Typical Injuries for Pedestrians
The nature of a pedestrian accident is that there is no protection from being hit by the full force of an oncoming vehicle. Without the additional protection that cars afford, injuries to pedestrians tend to be more severe in nature and are more likely to require emergency medical attention. Many are fatal.
Injuries to pedestrians can be primary or secondary. Primary injuries occur at the point of impact. Secondary injuries are inflicted when the impacts pushes the pedestrian into another solid object, like a wall, or when they hit the ground. For example, a primary injury of a broken rib may happen when a car hits a pedestrian. That same pedestrian may suffer a secondary injury of a broken arm when they are flung into a light pole nearby.
While the kinds and severity of pedestrian injuries range with each case, some of the most common include:
Lacerations, contusions, and scrapes – These more minor injuries will occur in nearly every collision involving a pedestrian. While generally mild, they should still be treated by a doctor to ensure that there are no underlying injuries (such as an internal bleed) and that no infections will develop from any open cuts.
Broken Bones – Pedestrians who have been struck by a car often suffer broken

bones as a result of the collision. Broken bones can be set at a hospital and in most cases the pedestrian will make a full recovery.
Traumatic Brain Injuries (TBI) – Traumatic brain injuries2 occur when some sort of external force acts in such a way that brain function is disturbed or impaired. TBIs usually result from a heavy blow to the head or body and can result in bleeding, skull fractures, and even death. More minor TBIs will usually result in bruising and tissue damage. Symptoms can include loss of consciousness, confusion, nausea, headaches, dizziness, fatigue, blurred vision, mood changes, vomiting, depression, memory problems, seizures, numbness in extremities, slurred speech, and falling into a coma.
Spinal Cord Injuries (SCI) – Spinal cord injuries occur when damage is done to any part of the spinal cord or to the nerves surrounding the ends of the spinal cord. This is usually caused by impact to the neck or back. Symptoms may include weakness, problems with coordination, muscle spasms, numbness, pain, loss of mobility, and loss of use of limbs and extremities.
Soft tissue injury – A soft tissue injury is the most common type of minor injury suffered in auto accidents. Essentially it is a strain, sprain or bruising of muscles, tendons, or ligaments throughout the body. The symptoms usually are pain, stiffness, weakness, minor loss of use of the affected area, and loss of range of motion. Treatment usually involves physical therapy and some combination of muscle relaxers and/or pain medication.
Accidents involving a vehicle and a pedestrian can be complex. Given the potentially severe consequences for the pedestrian involved, if you are a pedestrian who has been hit by a vehicle, you should contact a Florida injury attorney right away to ensure that you recover all that you are entitled to.
Contact a St. Petersburg Pedestrian Accident Attorney Today for a Free Consultation!
If you or a loved one has been involved in a pedestrian accident, contact a St. Petersburg pedestrian accident lawyer at the Dolman Law Group right away. To schedule a free consultation with one of our lawyers, call our office today at 727-222-6922 or send us an email through our online contact form.